As Music Director, Paul Hoskins has helped to build Rambert’s reputation as a vital force in new music in the UK. Following the UK premiere of Steve Reich’s Triple Quartet and a tour of Thomas Ades’ Living Toys, Paul won a Time Out Award in 2004, and then appeared with the Royal Scottish National Orchestra at the 2005 Edinburgh International Festival, conducting three Mahler song cycles with Gerald Finley and Jane Irwin.

In 2008, Rambert began a major programme of commissioning new scores. Paul also conceived the Rambert Music Fellowship, a residency scheme for composers, and launched the Rambert Orchestra. He conducts over 50 performances of new music every year, and the Music Fellowship has become one of the most respected schemes for music and dance. Since moving to the South Bank at the end of 2013, Rambert has commissioned 10 major dance scores, half of them by women. 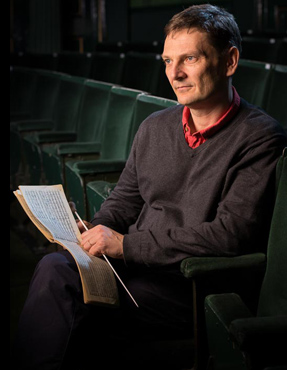 Paul has enjoyed many re-invitations to some of the world’s great ballet companies, appearing with New York City Ballet, San Francisco Ballet, Royal Swedish Ballet, and the Royal Ballet at the Royal Opera House, Covent Garden. In the last four years he has led major productions for the Croatian National Ballet in Zagreb; Spartacus for South African National Dance Trust in Johannesburg and Cape Town; Nutcracker for National Ballet of Canada in Toronto; and Highland Fling for Scottish Ballet in Glasgow and Edinburgh. Operatic work has included Don Giovanni with Roderick Williams, the world première of Stephen McNeff’s Clockwork, classical operas for Bampton Opera and the Buxton Festival, as well as assisting at Glyndebourne Festival Opera and regularly at English National Opera.

Paul believes that new music is vitally important in society. “Composers see further than we do”. We can only understand the classics if we are good at engaging with composers and their context. Young audiences (and dance audiences) are a natural place for new music.

The NMC Records CD Flux was released to mark Rambert’s 90th birthday and the success of its composers, and came with a package of resources for schools. Cheryl Frances-Hoad’s disc Stolen Rhythm was also released in 2017, winning strong reviews for Rambert Orchestra.

Paul is a mentor for young musicians with the charity Future Talent, a regular adjudicator at music festivals, and occasionally teaches sessions at the London senior conservatoires and Saturday morning Junior departments.

Ever since his first student job as conductor of the Morley College Symphony Orchestra in 1991, Paul has enjoyed training amateur orchestras. In London Paul has regularly conducted two of the best, Corinthian Orchestra and Ernest Read Symphony Orchestra, and worked as a guest with Salomon, Haydn Chamber Orchestra, Kensington Symphony and Forest Philharmonic.